Last Thursday, I got a lovely surprise when I got in from work, Linda from Remake, Remodel, Recycle, had nominated me for a Liebster Award!

so THANK YOU to Linda, I still cannot figure out the widget for sidebar, but have copied the pic below. 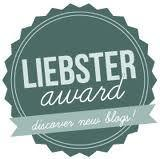 so down to the questions

What surprised you about blogging?
I had no preconceived ideas and blogged to try and get an idea of remaking/sewing up and running.  I decided one post per week, which gave me focus, and kept me motivated, and I kept the 'one post per week' going for a year - now I don't feel as obliged, but I do like the show-and-tell aspect as well as the on-line/virtual support.  the show-and-tell did focus me on my sewing skills and attempting to improve and hone them.

I also got into the habit of finishing items, even making myself baste a hem to get it to a finished state.

What inspires you to sew whatever you sew?
Generally the amount of fabric I have, and a vintage pattern - although the two rarely collide, so its always a compromise.  I buy the clothes from the charity shop based on the colour, and fabric, and then check to see how much fabric there is and go from there

What is your most selfish sewing habit?
Unsure on this one, as I think you have to focus on the job in hand (I don't even listen to the radio unless its hand-sewing).  Years ago I shared a flat with another girl and a pin ended up in the dinner somehow.(I sewed in the kitchen) and I didn't understand the fuss was about when it was found, (I saw it when dinner was being served) so 'no one got hurt', I now see how careless this was, and since switched to pearl pins!

Where do all the pins go? can anyone answer this?
see above!

Why do you blog?
Originally it was to commit to a project/idea, and I thought by putting my sewing out there would cut out some of my naughty sewing habits.  most have been gotten rid of - but I have yet to find the patience to sew elastic in correctly (as i only use  on underwear, and pjs I  am not going to lose sleep on that one - pls excuse lousy pun!)

Tell us something we might not know about you?
Vintage patterns are my Kryptonite!  about 20 years ago, I had stopped sewing by a lot, so I decided to donate my patterns to a charity shop (I did not have many), so when I started back sewing clothes again a few years ago, I lazily bought a pattern rather than draft, and was surprised how dumbbed down it felt.... so I started looking at vintage, and was hooked.  I now sometimes use vintage if I can, but a lot of times, I just appreciate the subtle line, and the sewing techniques (and the lovely sleeve variations.....)

Whats your favourite book?
I am thinking of re-reading 'The Charwomans Daughter' by James Stephens soon, we did it in school and I later read some of his other books and loved them.  He writes women so well, and some days I feel like Mrs Makebelieve, and some days I think I am Mary (both of them are dreamers).  I also read a lot of gumshoe, so have just finished 2 Denise Mina and 1 Sue Grafton

Whats your favourite film?
So many, but after watching an Orson Wells documentary last night, I want to re-watch The Third Man, last film seen was The Big Short, which I really liked

Which catches your eye first, plain or print?
Print - and plaid.  I love them, but invariable I sew plain .... although have just finished a plaid dress and about to start a print blouse....

What is your favourite sewing gadget?
Well its either the tailors ham that I bought in a charity shop (unused and with original packaging from the 70s and 3 euro) which makes me feel so professional, or the buttonhole feature on the new sewing machine (but the old sewing machine is still better for tailoring)

So Thank You
Finally, I would like to thank Linda and the bloggers listed below who have been so kind commenting on my blog, which is much appreciated and has been very encouraging.

I will nominate the women above, but I would like to add, that if they don't want to partake, its fine with me (I don't want to exert pressure, and re the number of followers rule..... I didn't really check as the followers thing is rather arbitrary as there are so many avenues for followers and I know these ladies potentially exceed......
what persuaded you to start a blog
favourite piece of advice you have been given
what is a favourite make (any medium)
best or worst sewing habit
most useless sewing gadget in your collection
what would be your 'dream' make
who taught you or inspired you, to sew/make
favourite cartoon character
favourite piece of music